Became interested in history, science fiction/fantasy and conspiracy theories in his teenage years. This prompted him to write short stories over the years. He is also a fan of tabletop gaming.

Has always loved language, and after a 5 year stint in advertising and journalism, now writes supernatural horror and fantasy. The Clockmaker is their first book and forms part of an upcoming series.

Find out more in the podcast below 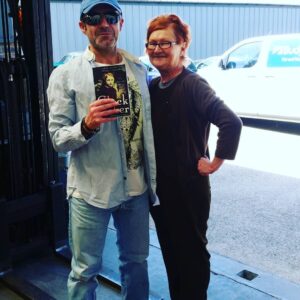 The Clockmaker is the first in an upcoming series of gripping supernatural books by Nottingham based Ceri Williams and Drew Neary.

Widowed in World War 2, Annette and her young son face a completely different life as they exchange the devastation of post-blitz London for the slow pace of a small village. The house they have inherited is old, its bones still settling, creaking noises in the dead of night and the murmur of scritch-scritch in the walls. Located outside the village of Lochnagar, it’s been empty for many years.

The unfolding of how the Clockmaker made his plans, his meticulous preparations and macabre creations, all builds up to a series of gruesome, horrific murders. These have just one end in view: his release from that which has held him captive for centuries.

“The Clockmaker is a character in the much larger Novel – Optics. When we put some extracts on our website, we received acclaim, and requests to develop the minor characters further. That was when The Clockmaker was born,” comment debut authors Ceri and Drew. The authors are currently arranging a series of book launches around the local area and have engaged various local writing groups with their debut.

A chilling supernatural novel with characters you’ll come to care for, The Clockmaker will interest anyone who fears the dark – and what might lie in the shadows…